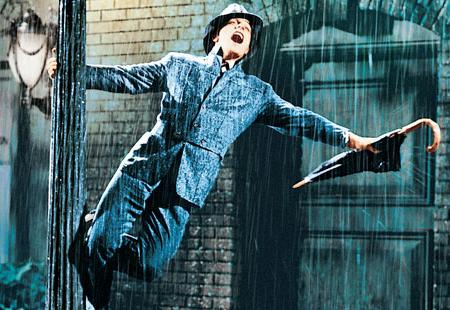 The golden age of the Hollywood musical reached its zenith in the 1950s, a time when a new younger market, post-war affluence, middle-class values, the Korean War and rock and roll music changed the focus of the film industry. The major studios were blessed by an improved Technicolor process, a widescreen format and production designs that appealed to an audience eager for the escape and exhilaration.

The M-G-M studios, led by Arthur Freed and his inspired staff of brilliant music makers, won two Academy Awards for Best Picture during the 1950s: An American in Paris and High Society. While also thrilling the cinematic world with Singin’ in the Rain, Royal Wedding with Fred Astaire no longer an ingénue, and Elvis Presley in his third film, Jailhouse Rock, M-G-M joined other studios to venture into remakes of Broadway hits. Guys and Dolls, Cole Porter’s Kiss Me Kate, Rodgers and Hammerstein’s Oklahoma and The King and I, and the frolicking The Pajama Game found new life on the silver screen. Judy Garland came out of retirement to create an independent production company, producing and starring in the tantalizing A Star Is Born.

Yet by the decade’s end, television was drawing more and more customers away from the country’s movie theaters as the Hollywood musical declined in number. A few of the major studios reduced their fulltime employees and production teams were gathered only for specifically designed films.

Enjoy an morning of memorable film clips, musical recordings and historical information by storyteller Robert Wyatt, and swoon with remembrances of “Singin’ in the Rain,” “The Man That Got Away,” “When You Wish Upon a Star,” “True Love,” “I Got Rhythm,” “Another Op’nin’, Another Show” and dozens of others.