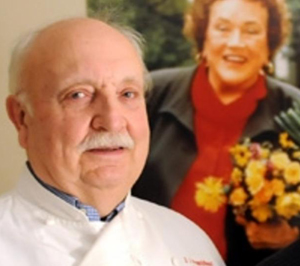 Master Chef Jean-Jacques Paimblanc brings three signature seafood dishes to this Fall’s menu: Pine Cone Chinese Fried Fish with Szechwan Pepper, Salmon Carpaccio and Shrimp in a Vegetable Nest with Mustard & Cognac Sauce. Each of these elegant entrees showcases a different seafood preparation to expand your culinary skills. Also, since much of the prep work can be done ahead of time, they’re great go-to recipes for entertaining. The chef’s Autumn Leaves recipe, pastry topped with baked apples, gives this cooking class a very sweet ending.

Chef Paimblanc graduated from L’Ecole de Cuisine de Lyon and trained at some of the top European establishments, including the Savoy Hotel in London, Restaurant Longchamps in Monaco on the French Riviera and Lucas-Carton, Le Grand Vefour and Maxim’s of Paris. He landed in the United States in the 1960s at the New York Pavilion, the leading restaurant of the time. During his career, he’s served in key product development positions with major brands like Pillsbury, Legal Seafoods and the Howard Johnson company (with French chefs and celebrities Pierre Franey and Jacques Pepin). He also co-authored “Seafood as We Like It,” (1985) with the late Anthony Spinazzola, longtime restaurant, food and wine critic for the Boston Globe.