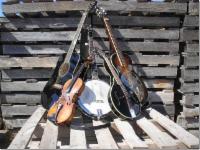 Bluegrass, sometimes called the “jazz of country music,” evolved from the string band style developed by Bill Monroe and his Blue Grass Boys in the late 1930s. The sound is characterized by masterful, often improvisational, instrumental performances combined with distinctive vocals and harmonies.
A native of Kentucky, Monroe named his band after the Bluegrass State. He merged old-time mountain music with blues and gospel tunes.
Over the next 50 plus years, Monroe performed with countless musicians who served “apprenticeships” as Blue Grass Boys, then left to start their own groups. By the 1960s, the music was known simply as bluegrass.
Register on-line or call, 508-495-1878, ext. 2
+ Add to Google Calendar+ Add to iCalendar