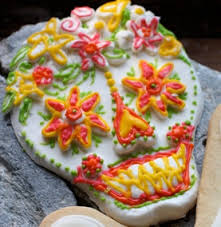 SOLD OUT! International Series: Mexican Day of the Dead Dinner with Peggy Egan

Dia de los Muertos traditionally starts at midnight the night of October 31, and the festivities are abundant in images related to death.  Rather than fearing death, as Americans do when marking Halloween, Mexicans celebrate the memories of those who have died.  This Mexican holiday is a mixture of Catholic and native Mesoamerican beliefs and customs.  The foods that are prepared at this time developed out of a combination of traditions.  Join us as we make Pan de Muertos (Day of the Dead Bread) and Calabaza en Dulce (Candied Pumpkin).  Peggy will also show us how to make pork garnachas (little fried tortillas with meat and other toppings), and we will finish with chocolate caliente con churros (churros with hot chocolate).  Come and learn how to celebrate, Mexican style!