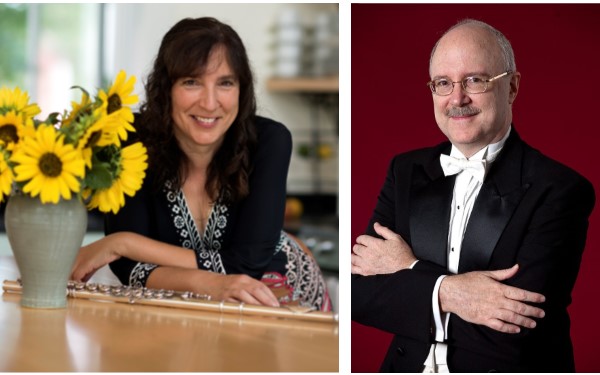 There are moments you never forget…

For flutist Karen Kevra, getting nominated for a Grammy for the premiere recording of works by her mentor, world-class flutist Louis Moyse, was certainly among them. Classics Today.com gave it a top 10/10 rating and awarded it “Disc of the Month.” Fanfare called it “a must for flute fanciers and anyone else with ears.”

For Jeffrey Chappell, few things could top substituting for the great Chilean pianist Claudio Arrau. With four hours’ notice and no orchestra rehearsal, he performed the mighty Brahms Second Concerto with the Baltimore Symphony to critical acclaim. He was only 24 at the time.  Both artists have soared to the heights of the music world as soloists…and played brilliantly together as well.  In 2009, these long-time collaborators recorded the “achingly beautiful” and “sublimely satisfying” Romantic Music for Flute and Piano.

We’re bringing them together once again to perform especially for you!