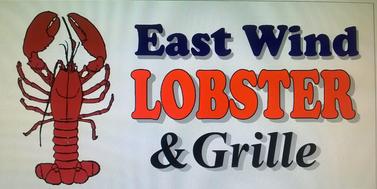 This exclusive series features chefs from regional restaurants.  Enjoy demonstrations, meet and talk to the chefs, and hear what goes on in the kitchen and how the magic happens. These programs sell out fast –  please register early to avoid disappointment.

After a 10-year sabbatical, East Wind Lobster & Fish Market owners Jean M. and Thomas P. Lanahan are getting back behind the grill and the deep fryers. The Lanahans said they were unable to reach an agreement on a new lease with the tenants who have operated the restaurant since2004, so the couple has decided to again take over day-to-day operations of the business. Ms. Lanahan said that she and her husband opened East Wind Lobster in 1991. For the first three years they were in business, the restaurant was housed in the building where    Abb Moonwalk Rentals currently is on Main Street. In 1994 they moved the business to its current location and operated it themselves until 2004. At that point they made a decision to step away from operating the restaurant. “The main reason we got out of it was because the kids were in grammar school; they were younger. Now they’re at an age where it fits our lifestyle better ,” she said.

The Lanahans have two daughters, both at Bourne High School. Elizabeth (Liz), 18, is a senior, and Jacqueline, 15, is a sophomore. Ms. Lanahan said they have decided to change the name of the restaurant to East Wind Lobster & Grille. She said the name change is a reflection of their plan to expand on the current menu of fried seafood, which includes such favorites as fish and chips. She said the expanded menu will feature healthier items, such as soups and sandwiches and grilled food to accommodate a wider range of tastes. “Not everyone eats seafood. As for drinks, the Lanahans said they do not have a liquor license, so they will not be serving any alcohol. Ms. Lanahan explained that to have even a beer and wine license, they would have to enclose their outside deck and patio area.

Ms. Lanahan added that while they welcome the tourist trade, their focus will be primarily on attracting locals. “We’re glad to have the summer people, the influx of all the tourists, but the main thing for us is the year-round people,” she said.

A culinary arts teacher at Upper Cape Cod Regional Technical School (Continuing Education division), Ms. Lanahan calls herself “a foodie” and said that cooking is “in my blood.” She said she will be hiring a chef but she will be assisting with the cooking. As for the rest of the staff, she anticipates hiring a dozen or so people, divided between the day and night shifts. The Lanahans are currently waiting for approval of two newsigns featuring the restaurant’s new name. One sign will go on the building’s roadside marquee andthe other above the entrance door…………..She said there is a lot of enthusiasm in town about the couple’s plans for the restaurant. “Everybody we’ve talked to is really excited. We’ve lived in this town, our kids were raised in this town, so we know a lot of people, and they’re pretty excited,” she said.