From our Landscape Director, George Chapman 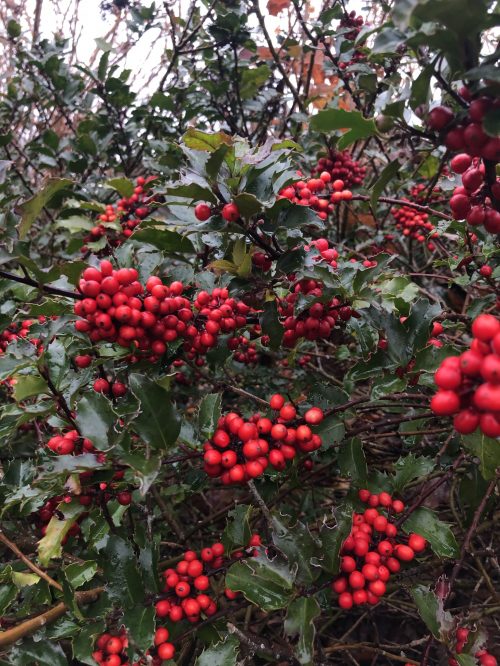 A big part of the holiday season is decorating with fresh cut greens. Cut berried holly is one of the more popular greens used this time of year. I have found the Meserveae Hollies to be the best hybrid hollies for this use because of their color, berry count and longevity.

Meserveae Hollies are a cross between Ilex aquifolium (for winter hardiness) and Ilex Rugosa (an English style holly). Ilex meserveae “Blue Princess” is my favorite. Like other hollies in this group, the shrub has dark purple stems, extremely dark, blue green shiny foliage and bright red berries.

It is important to know that Meserveae hollies are dioecious, meaning there are separate male and female plants. It is recommended to plant one male plant for every three to five female plants to ensure good cross pollination for heavy berry production.

Plant Ilex “Blue Princess” in close proximity to Ilex “Blue Prince”. When using cut holly stems and other evergreens for indoor use be sure to spray them with an anti-desiccant such as Wilt Pruf or Wilt-Stop to make them last for the season.