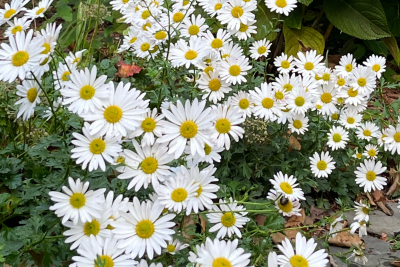 We are all familiar with the white flowering shrub-like perennial that brightens Cape Cod gardens this time of year– the Montauk or Nippon Daisy, Nipponanthemum nipponicum. Although a perennial, this plant can grow to be three feet tall and three feet wide in a single season, and its bright green glossy foliage is covered with three-inch daisy like flowers this time of year.

Interestingly enough, there is another perennial that flowers at the same time with a strikingly similar flower. It is a perennial that I know as Chrysanthemum ‘White Bomb,’ but it has recently been reclassified as Dendranthema ‘White Bomb.’ The flower is the only characteristic that these two perennials have in common.

White Bomb is a vigorous ground cover that grows only six to eight inches tall and spreads to two to three feet wide. It’s mat forming dark green foliage suppresses weeds all season long. Come October the plant is covered with white daisy-like flowers that take on a pink hue as temperatures drop. Tough, practical and beautiful, call it what you want, Chrysanthemum or Dendranthema, it’s the bomb!