Philanthropist James “Jim” McConnell Clark, of Woods Hole and Palm Beach, FL, passed away on Saturday at the age of 93. Mr. Clark was the son of Edna McConnell Clark and Van Alan Clark and is the husband of Ruth P. Clark.

Jim Clark was born in 1922 in Suffern, New York, into a family that included brothers Van Alan Clark, Jr. and Hays Clark. Their grandfather, David McConnell, founded the Avon Corporation.  McConnell was a door-to-door book salesman in New York State in the 1880s. As an incentive, he offered potential customers a vial of homemade perfume that proved to be more popular than the books. Recognizing a potential market, he formed the California Perfume Company in 1886 and recruited housewives to sell the perfume as a way to augment their family income. The company added other cosmetics and household products and, in 1936, was renamed Avon. When Mr. McConnell died in 1937, his daughter’s husband, Van Alan Clark, succeeded his father-in-law.

When Jim Clark was just three years of age, a recommendation from the doctor to find a healthy sea-side location for the little boy brought the Clark family to summer in Falmouth where they bought a house in Waquoit. Later, the family moved to the outermost promontory of Penzance Point in Woods Hole into a house that was constructed in 1912.

Graduating from the Loomis School, Clark matriculated to Cornell University. When just a freshmen, in 1941, war was declared by Franklin Roosevelt. Mr. Clark immediately joined the Navy, but was allowed to remain at Cornell to complete an accelerated engineering program. Upon graduation in early 1944, he finished midshipmen training on the Cornell campus and a few months later boarded the U.S.S. Riverside, an attack transport ship, on which he would serve until 1946. During that time he was promoted to chief engineer of the ship which transported troops to and from Okinawa, Japan, and did the “Magic Carpet Run” bringing troops home at the end of the war. Reminiscing about this time, Jim commented “None of my engineering studies at Cornell prepared me in the least for being the engineer on a ship!”

Upon completing his Naval service in 1946, Jim opted not to join the family at Avon, where his older brothers were already employed, but to strike out on his own in the business world. He worked first at the Bristol-Myers Company working “hands-on” in the manufacture of toothpaste, antibiotics and other medical products. This was followed by a stint working the night shift at American Paper Goods, a company that manufactured envelopes, bags and waxed cups. By the early 1950s, Jim had landed on Wall Street as a trader for the firm Hemphill, Noyes & Co. His career at the New York Stock Exchange spanned many decades as he followed Hemphill, Noyes through a tangle of mergers and acquisitions and rose to become the CEO and Director of Hornblower, Weeks, Noyes & Trask, which in 1978 became Loeb, Rhoades, Hornblower & Co. In 1990, Jim retired as Chairman and Partner from its successor firm, Shearson Lehman Hutton, Inc. (a predecessor to Lehman Brothers).

Edna McConnell Clark and Van Alan Clark established a legacy of philanthropic support which their son fostered throughout his life. Devoted to his alma matter, Mr. Clark served as a Trustee of Cornell University from 1978 to 1986, and in 1986 was elected a Trustee Emeritus and a Presidential Councillor, the highest honor Cornell bestows upon alumni leaders. The Clark name is carried on several facilities on the Cornell Campus, including Clark Hall and the James McConnell Clark Atrium in Cornell’s Physical Sciences Building. The Hays and James M. Clark Director of the Office of Undergraduate Biology is a position funded by Mr. Clark and his late brother, Hays.

Mr. Clark and his family dedicated considerable time and financial resources to support scientific and medical research. The family shared a view that “knowledge is the pathway to the improvement of the human condition,” and much of his philanthropy was based upon this pursuit of knowledge. The Clarks were especially involved with the Woods Hole Oceanographic Institution where the largest building bears the Clark name. Believing that learning about and understanding the oceans was fundamental to sustaining all life, Jim and Ruth Clark established the Clark Arctic Research Initiative at WHOI in 2009. This made possible the institution’s first large-scale, integrated research initiative to study the Arctic Ocean and its surrounding environments in an attempt to better understand and predict future climate change. Mr. Clark was an advisor and benefactor to WHOI for more than 30 years, having served as President of the Board and Chairman of the Corporation from 1991 to 2004 and as a Trustee Emeritus until his death. In 2009 he was presented the Cecil Green award honoring “individuals who have made outstanding contributions to oceanographic research at Woods Hole Oceanographic Institution.”

The Clark’s commitment to medical research and the medical profession has also been significant and includes the funding of the Clark Radiation Oncology Center at Mass General. As cancer survivors, both Mr. Clark and his wife, Ruth, were interested in bringing state-of-the-art cancer treatment to Cape Cod so that local residents could seek treatment closer to home. In 2008 they funded the Clark Oncology Center at Falmouth Hospital which opened in 2011.

The Clarks were also instrumental in the restoration of Highfield Hall and Gardens where Ruth Clark serves as a Trustee Emeritus. From 2005 until his death, Mr. Clark provided significant financial support to ensure that the building could be properly restored and successfully operated as a cultural center and historic site. The Clark Gallery and The Clark Library at Highfield Hall honor the Clark’s involvement in the community restoration project.

Mr. Clark was a Trustee Emeritus and former Chairman of the Board of the Edna McConnell Clark Foundation, a foundation founded by his parents that is today, one of the largest family foundations in America. He was also the President of the Penzance Foundation and the Sealark Foundation, family foundations which have supported many charities across the country. His other affiliations included: Honorary Trustee, The Lincoln Center Institute and the New York City Mission Society; Life Trustee of Colombia Presbyterian Hospital; Trustee, The Worcester Foundation of Biomedical Research; Member, The Presidents Circle, The National Academy of Sciences.

In 2009, James and Ruth Clark received the “Outstanding Philanthropist” award from the Philanthropy Partners of Cape Cod in honor of their commitment to the Cape through their support of WHOI, Cape Cod Health Care, and Highfield Hall and Gardens. Their philanthropy has significantly impacted the mission of dozens of organizations on the Cape and beyond.

Known to many as “Skipper,” Mr. Clark was an avid sailor and spent much of his free time on the water. His love of the sea began at a young age in Waquoit where he listened with keen interest to the stories spun by his neighbor Charles Swift, a retired whaler who had shipped out on a Falmouth whaling ship when just 15 years of age. For many decades, Jim Clark participated in the Newport-Bermuda and Marion-Bermuda races, going so far as to design his own boats with the help of friend Halsey Herreshoff.  In his 44 foot F & C sailboat Farfelu, he accumulated a lifetime of his own stories as he cruised from Novia Scotia to Key West and all points in between.  Jim Broda of Falmouth, who sailed many an excursion with Skipper Clark on the Farfelu or on the motorboat, Sealark, commented that Clark was “the captain of humor and master of cockpit lore.”

Jim Clark leaves a wife, Ruth P. Clark; his son James McConnell Clark, Jr. and wife Kathy, and two grandsons, Sam Clark and Nathan Bebo. A service will be held on Friday at noon at the Church of Messiah in Woods Hole. A public reception at Highfield Hall and Gardens will follow. In lieu of flowers, donations may be made to Cape Cod Healthcare Foundation for Falmouth Hospital, or to Historic Highfield. 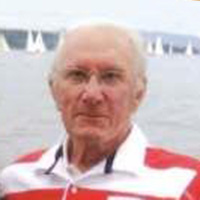