RECIPES OF THE WEEK FROM OUR CULINARY INSTRUCTOR GAIL BLAKELY!

Years ago, Jim Lahey, who turned the world of bread baking upside down in 2006 with his no-knead bread technique, published a book called, quite simply, My Bread. Lahey added carrot juice to one of his recipes, which I thought was a great idea.  Over the years, I have used his technique when teaching my bread workshops, then turned to a more streamlined version of bread baking.  By streamlined I mean that you can turn out delicious bread in under two hours, rather than twenty four.  Making this peasant bread has been almost as popular as the original no-knead; in fact, I recently noticed it was on the King Arthur Baking Company website.

Credit for the peasant version goes to Alexandra Stafford, whose mother gave her this recipe.  Her book, Bread, Toast, Crumbs, is another we have used at Highfield in the past.  Inspiration for this delicious springtime loaf (though it will definitely be on my table at Thanksgiving) comes from both of these talented bakers.  All you need to do is locate some carrot juice and bread flour, and you are good to go! 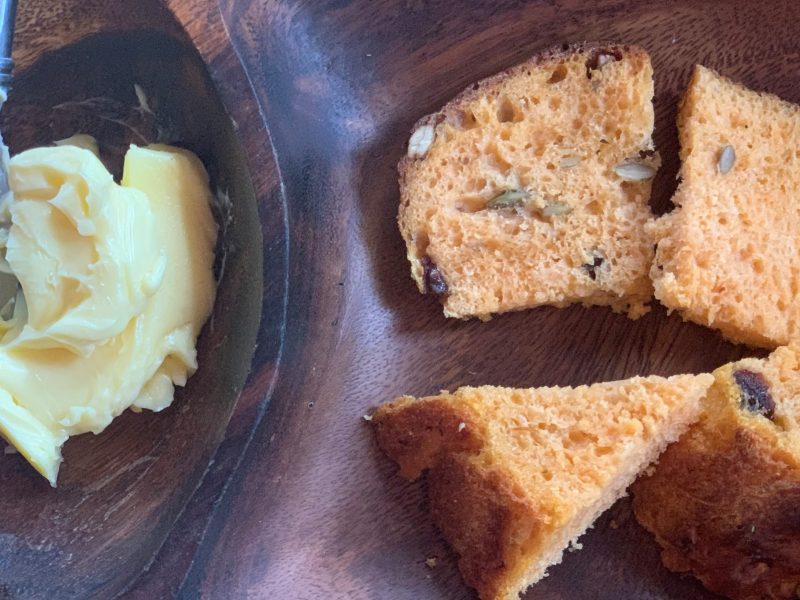 Credit for the peasant version goes to Alexandra Stafford, whose mother gave her this recipe.

The “top” of the bread becomes the “bottom” this way; let cool at least one hour before slicing.