RECIPE OF THE WEEK FROM THE STAFF AT HIGHFIELD HALL & GARDENS, LISA WALKER!

Let me first start by saying this picture is not truly representative of this recipe, it just so happened to be the only still shot I had when I first started making the recipe 5 years ago.  I am happy to say my flambe techniques have greatly improved!

This recipe has been adapted from the Bluefish Flambe recipe in New England Open House Cookbook by Sarah Leah Chase.

This original recipe calls for bluefish, but I have found that most people “think” they don’t like bluefish without giving it a proper try – believe me, I was once of those people!  The trick with bluefish is letting it “marinate” in milk for at least an hour or up to a day in advance – trust me!  If you decide to try this with bluefish just rinse off the milk before cooking.  If you aren’t quite ready to go all in with the bluefish don’t worry the recipe is just as tasty with salmon or even striped bass.  I hope you’ll give this a try as it really is easy, uniquely tasty, and not to mention a bit of a showstopper if you are serving to guests! 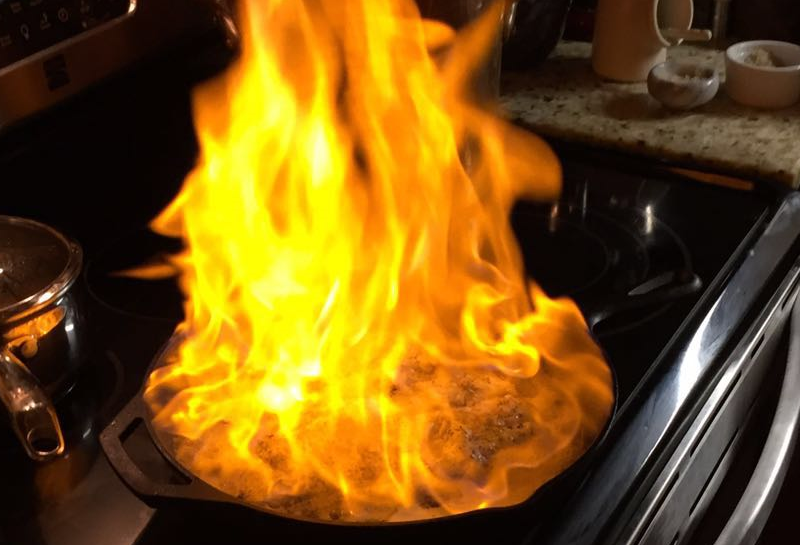 Recipe has been adapted from the Bluefish Flambe recipe in New England Open House Cookbook by Sarah Leah Chase.

I like to serve with crusty bread to soak up the sauce but basmati rice is good too.
Cooks notes: Before you flambe the fish, check the skillet, if there is a lot of melted butter and oil in the skillet you may want to drain some so the flame doesn’t get out of control.